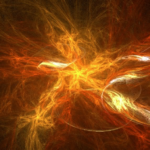 by Fr. Patrick Henry Reardon When, at the Council of Nicaea, the Church formally determined that Pascha should always be observed on a Sunday, that determination necessarily affected the final day of Pentecost. Thus, beginning and ending on a Sunday, the whole fifty days of Pentecost began to take on some of characteristics associated with Sunday, the day of the Lord’s Resurrection. This adjustment involved two disciplines in particular: the fast days and the posture of prayer. First, because the entire fifty days of the Paschal season was a celebration of the Lord’s Resurrection, Christians began to observe that interval as a non-fasting period. That is to say, from the fourth century … END_OF_DOCUMENT_TOKEN_TO_BE_REPLACED 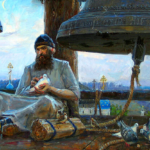 by St. Innocent of Kherson Translation by Jesse Dominick By the grace of God we have, brethren, finished another Holy Lent. Much has been acquired by those who spent it as they ought, but likewise, it’s no small loss for those who didn’t spend it as they ought. The Church doesn’t force anyone to fulfill the statutes, but those who don’t, punish themselves. When those who have labored well in fasting now enter into the joy of their Lord, the weak and disobedient sons of the Church must necessarily feel some deprivation and sorrow. It’s good if God allows them to live again until another Lent to correct the present omission (although it’s no longer possible to fully get back what was lost); … END_OF_DOCUMENT_TOKEN_TO_BE_REPLACED 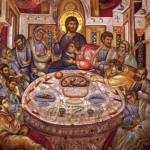 by Archpriest G. C. Debolsky On the day of the feast of unleavened bread, when according to the Law of the Old Testament a lamb was to be slaughtered and eaten, the hour was come that the Savior should depart out of this world unto the Father (cf. Jn. 13:1). Having come to fulfill the law, Jesus Christ sent His disciples, Peter and John, to Jerusalem to prepare the Passover, which, as the shadow of the law, He wanted to exchange it with the New Pascha—His own Body and Blood. When evening had come, the Lord came with His twelve disciples to a large, prepared upper room of a man who lived in Jerusalem (cf. Mk. 14:12–17) and reclined there. Telling them that the Kingdom of God, which is not … END_OF_DOCUMENT_TOKEN_TO_BE_REPLACED 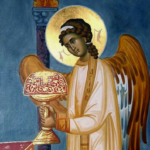 by St. Ignatius of Antioch “Take note of those who hold heterodox opinions on the grace of Jesus Christ which has come to us, and see how contrary their opinions are to the mind of God….They abstain from the Eucharist and from prayer because they do not confess that the Eucharist is the flesh of our Savior Jesus Christ, flesh which suffered for our sins and which that Father, in his goodness, raised up again. They who deny the gift of God are perishing in their disputes.” Letter to the Smyrnaeans … END_OF_DOCUMENT_TOKEN_TO_BE_REPLACED 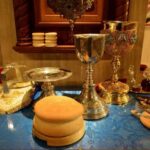 by Fr. Patrick Henry Reardon Originally entitled The Holy Eucharist: A Live Coal Speaking of the Holy Eucharist, the Fathers and early liturgical texts of the Church have recourse to the metaphor of the flaming coal (anthrax, pruna) in reference to the Lord’s body. For instance, with Isaiah 6:7 obviously in mind, The Liturgy of St. James refers to “receiving the fiery coal” (labein to pyrinon anthrax) from the Eucharistic altar. Indeed, even without using this word, those same doctrinal sources regularly appeal to Isaiah’s experience, when they speak of the Holy Eucharist. Thus, in The Liturgy of S. John Chrysostom, when the Christian has received the Holy Communion, the priest tells … END_OF_DOCUMENT_TOKEN_TO_BE_REPLACED