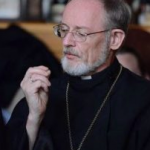 by Fr. Alexander F. C. Webster, PhD The recent public statement by the Orthodox Theological Society in America (OTSA) released on March 8, 2021, with this unwieldy title—“Covid-19 vaccines: How they are made and how they work to prime the immune system to fight SARS-CoV2”—offers a seeming patina of legitimacy to an ethical argument that is abhorrent to any informed, devout Orthodox Christian. (See https://www.otsamerica.net/wp-content/uploads/2021/03/Covid19-VaccineTech.pdf.) In this essay, I shall retrieve that gauntlet and offer what I hope is a compelling counterargument. I.        The OTSA statement declares boldly, “Most Church leaders have agreed that the many lives saved by … END_OF_DOCUMENT_TOKEN_TO_BE_REPLACED 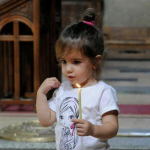 Originally titled: Should Protestants Make the Sign of the Cross? A Response to Pastor Doug Wilson by Robert Arakaki In a 30 December 2012 podcast, Pastor Doug Wilson was asked what he thought about Protestants crossing themselves.  Apparently, this question was asked because growing numbers of Protestants have started crossing themselves.  In short, Pastor Wilson’s answer was: “It’s lawful, but it’s not appropriate at all.” He elaborated that it would not be appropriate because it could cause confusion, that is, a Protestant making the sign of the cross might be mistaken for a Roman Catholic. In this blog posting I will be discussing: (1) the origins of this practice, (2) why many … END_OF_DOCUMENT_TOKEN_TO_BE_REPLACED 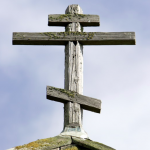 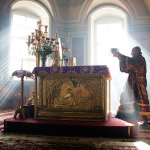 On the Sunday of St. Gregory Palamas by Priest Ioannis Fortomas     Brethren, today we celebrate a great Father of our Church and champion of Orthodoxy: Gregory Archbishop of Thessaloniki, the Palamas. His memorial is ordained by the Holy Church on the second Sunday of the Fast to indicate that, in St. Gregory, the Triumph of Orthodoxy over heresies (which we celebrated last Sunday) continues. St. Gregory did not introduce new doctrines to Orthodox theology; he simply mounted a defense of the treasured, mature, dogmatic tradition. Not everything that is ancient is venerable or honorable—indeed, many heresies are ancient. We must discern the Truth in all things. The Truth is eternal … END_OF_DOCUMENT_TOKEN_TO_BE_REPLACED 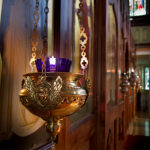 Originally entitled, “A Rule of Self-Attentiveness For Those in the World” by St. Ignatius Brianchaninov The soul of all exercises in the Lord is attention. Without attention, all these exercises are fruitless and dead. He who desires to be saved should arrange things in such a way that he can safeguard self-attentiveness not only in seclusion, but also among the very scatteredness into which he is sometimes drawn against his will. On the scales of the heart, let the fear of God prevail over all other feelings: then it will be easy to safeguard self-attentiveness, both in the silence of one’s cell and amid the noise surrounding one on all sides. Prudent moderation in food, by reducing … END_OF_DOCUMENT_TOKEN_TO_BE_REPLACED