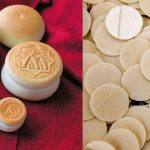 In the Bible, unleavened bread is called "unleavened bread," whereas leavened bread is simply called "bread." The Jews at that time would have understood this as would have the early Christians. It says that "He took bread," meaning leavened bread; and the Christians, being first instructed by the Apostles and then reading in the Gospels some time later, implemented this. At the Mystical Supper, it is obvious that our Lord was changing things, to tie the Passover meal with its fulfillment, the Eucharist. One of those changes, obviously, was using leavened bread instead of unleavened, or at least leavened in addition to unleavened. The world was empty and devoid of grace before Christ, as is … END_OF_DOCUMENT_TOKEN_TO_BE_REPLACED