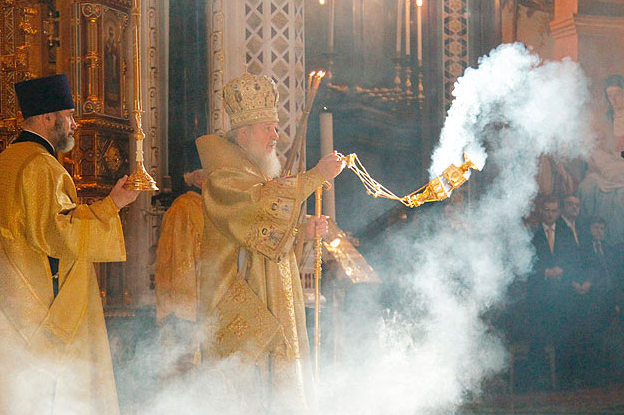 From the Inkless Pen, the Blog of Fr. Zechariah Lynch

Below the reader will find my translation from the Russian of sermon number 15 by St. Seraphim (Zvezdenski), On the Divine Liturgy.

These sermons by St. Seraphim are of the uttermost importance for Orthodox Christians today. He tells us clearly that there is no greater gift on Earth than the Divine Liturgy. The Divine Liturgy is the very heart and soul of the Body of Christ. St. Seraphim makes clear to us today the extent that the early Christians went to in order to protect and attend the Liturgy. Speaking from the harmonious voice of the Fathers, he tells us that for the sake of the Divine Liturgy the sun shines and the earth brings forth fruit. Is it any wonder that the enemy of our salvation seeks to either halt the service of the Liturgy or pervert it into something else? The saint tells us that it is a Divine window through which the heavenly air comes into our sinful world. Is it any wonder that some would seek to close it? If it is closed we will truly suffocate.

It becomes very clear that the answer to every problem facing our world is found in an increase of prayer, most of all the Divine Liturgy. In our times of continued crises, prayer should be intensified and not reduced, even if in the name of “keeping people safe.” May we acquire, at least in some small way, at least a portion, of the deep knowledge of the power of the Divine Liturgy that St. Seraphim and all the Saints had.

All titles of the sermons are my own for the purposes of this blog, in the original, they are simply numbered.

On Earth, there is no greater treasure than the Divine Liturgy. Even if all the treasures of this world were gathered together, all the gold brought forth, every precious stone, every pearl taken from the oceans and seas, and placed on one side of a scale; and on the other side is placed the Divine Liturgy – a Liturgy served by the simplest of village priests in the poorest of churches – the scale will tip toward the Divine Liturgy.

People do not understand or comprehend what treasure they possess. Until a certain happiness is removed, most people do not comprehend its value. Sadly, a person typically does not value that which he receives without labor – he does not value the sun or the air which he breathes. Only if the sun and air were somehow taken from him – if darkness were to descend and he had nothing to breathe – in that moment he would understand what he had and what he has lost.

And so it is with the Divine Liturgy. It is served daily and a person has the opportunity to be in church daily, and yet he does not go, or if he does go, he often is present but mentally distracted and carried about by the worries and cares of this life. Why is this? It comes from the fact that such a person does not contemplate upon the nature of the Divine Liturgy, he does not understand the whole depth and full significance of the service taking place before his eyes. Moreover, of all the miracles the greatest, most inscrutable, most wondrous, of miracles is the Divine Liturgy, the Eucharist. For the sake of the Divine Liturgy, the sun shines during the day, and the moon by night, and the heavenly stars shed forth their calm light, and the earth offers forth bread – that it may become the Holy Lamb upon the altar. Only for the sake of the Divine Liturgy does the earth bring forth its fruit for bread, on which we feed – these are crumbs from the Lord’s feast […]1 In the book of Revelation, St. John the Theologian outlines his vision, in which he beheld a woman clothed in the Sun of righteousness. And the dragon of the abyss strives to release his poison on her. The woman flees from him into the wilderness, but since the dragon pursues her even there, she hides in the rock2 […] According to the teaching of the holy Fathers, the woman seen by St. John is the Church, clothed in the Sun of righteousness – Christ. In the last times, such persecution will be raised against the Church that she will hide in the wilderness. The Divine Liturgy will be served underground. The Divine Liturgy will not be served on the land and the sun will not give its light and the earth will cease to give forth bread.3

The Divine Liturgy is the exact image of the earthly life of the Savior. It may be that you have a photograph of someone. When you look at it you can say, “How similar it is to the person – the eyes, the eyebrows, the nose – everything is similar to the actual person.” If a photograph is similar to your loved one and you endeavor to protect and keep it because it represents that person to you when you cannot see him. We can speak of the Divine Liturgy in a similar manner, it is an exact photograph and image of the whole earthly life of our Lord Jesus Christ. From Bethlehem, where the Pure Virgin came to be registered and give birth to the Lord, to the Jordan, and from the Jordan to Gethsemane, and from Gethsemane to Golgotha, and from Golgotha to Resurrection, and from Resurrection to the Mount of Olives – everything is visible in the Liturgy. And even if we are not among those blessed ones who lived during the time of our Lord’s stay on earth, those who had the great joy of seeing Him face to face, yet we possess this priceless gift4 that the Lord has left for us, and by which we are almost as fortunate as they were.

A mother sometimes leads her child by the hand, sometimes sits near him and observes him, and sometimes takes him up in her arms and caresses, cherishes, and nourishes him; in like manner, through every church service and home prayer, it is as though the Lord takes us by the hand, observes us from afar, and in the Divine Liturgy, He takes us up in His arms, sits us together with Himself at the table, and feeds us at His Supper. In every service, except the Divine Liturgy, we speak with God as if over a telephone, but in the Divine Liturgy we speak with God face to face; we directly speak to the Lord about our needs and personally offer thanks and supplicate Him. Therefore, the prayers of the Divine Liturgy are more powerful than any other service. Thus, it is established that prayers for the departed be offered at the Divine Liturgy. By it, the souls of the departed are brought special consolation.

Christians during the first centuries of Christianity attended the Divine Liturgy daily and communed of the Holy and Life-creating Mysteries of Christ. In those days, the lives of Christians were so holy and blameless, they lived so constantly present in God, that their very lives were authentic preparation for the reception of the Holy Mysteries, and so no special preparation was demanded of them. If it happened that a Christian must be absent (from the Liturgy) or travel, then such a one – without exception, servant or lord, male or female – would take a small particle of the Holy Mysteries with himself and commune. Every Christian had the custom to bring three treasures with him (on a journey) – a cross, the Holy Gospel, and a vessel with a particle of the Holy Mysteries.

For the sake of the Divine Liturgy, Christians were ready to spill their blood and were persecuted by the pagans. They were tortured, crucified, burned, and often killed in the temple5 itself – in the very catacombs during the service of the Eucharist. In ancient times, it was the custom to serve the Liturgy on the graves of martyred Christians, this was done as a sign of testimony to the great price at which the Divine Liturgy was purchased. Today, the memory of this is kept by sewing a portion of a relic from a saint into the Antimins.6

We will end our reflection on the meaning of the Divine Liturgy with this account of a vision that one ascetic-starets saw. He beheld a sea of fire with surging and boisterous waves; can you imagine such a terrible sight? On the other side upon the shore there stood a wonderful garden from which was heard the melodious song of birds and wafted the sweet scent of flowers. The ascetic heard a voice, “You must cross this sea.” But it was impossible to cross. He stood long in thought about how he would cross it, and then he heard a voice, “Take up the two wings that are given in the Divine Eucharist: one wing is the Divine Body of Christ; the second wing is His Life-creating Blood. Without them, it is impossible to reach the Kingdom of Heaven, no matter how great your podvigs.” For this reason, Mary of Egypt, who offered podvigs for forty-seven years, attaining even to being lifted into the air while at prayer, asked the holy elder Zosimus to add unto her this – the Holy and Life-creating Mysteries.

1 Indicates a break in the original text.

6 Or also spelled, Antimension. “The Antimins is a silk cloth consecrated by a bishop upon which Jesus Christ is depicted being placed in the tomb. Into the other side, a fragment of the relics of a saint must be sewn, since in the first centuries of Christianity the Divine Liturgy was always celebrated upon the graves of the martyrs. One is not allowed to celebrate the Liturgy without Antimins. The word from the Greek means “instead of an altar table.” (The Law of God. Holy Trinity Publications, pg 528)