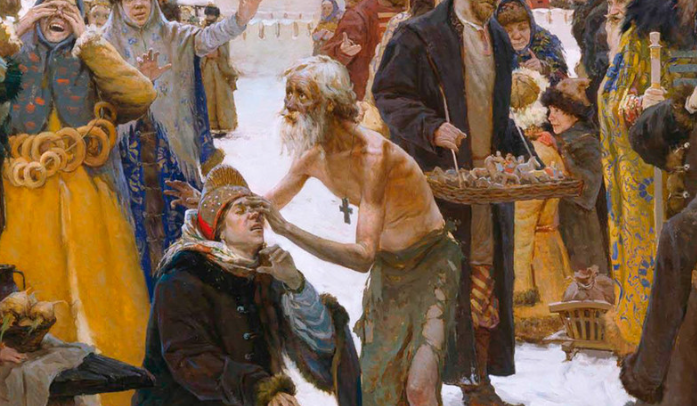 Few things are as awkward (and even painful) as “feeling like a fool,” whether it is the mild thing we call “embarrassment,” or the stronger things that make us want to disappear or run away. No one wants to be the fool. Nevertheless, I have come to see God as a “fool,” and those rare saints whom we name the “holy fools,” to be amazing exemplars of this way of being.

I do not mean to scandalize anyone by saying that I’ve come to see God as a fool. I mean, rather, to suggest that we seem to constantly ignore His abiding foolishness and, as a consequence, fail to understand His love.

St. Isaac of Syria wrote about God’s “manikos eros” (literally, “crazy desire”) for His creation, particularly for us. In the Old Testament, He famously commanded the Prophet Hosea to marry a prostitute (and to be madly in love with her), and to forgive her and take her back, again and again. It was a prophetic example of God’s own love for Israel, despite her repeated unfaithfulness. Hosea is among the earliest examples of a holy fool, and we have God to thank for that.

I cannot begin to number the conversations I’ve had over the years about the impracticality of the Sermon on the Mount. Forgiving enemies, forgiving debts, taking no thought for the morrow, etc., sounds like a recipe for practical disaster. We wonder who could possibly live like that. And yet, what we see is not accidental. It is not an example of excessive zeal or hyperbole. Instead, it is the foolishness of the gospel spoken directly to us.

St. Paul described the gospel as “foolishness.” In doing so, he focused particularly on the Cross. Though we sing of the Cross as the “Weapon of Peace,” we strangely tend to hear it as “weapon,” and forget the rest. The physics of violence not only makes sense to us, we frequently imagine that it is how things actually “work.” The plain fact of the matter is that violence begets violence. It always has and it always will. It is the mad calculus of genocide – for only when an enemy ceases to exist is the danger from reprisal and a continued cycle of violence removed. And even then, the inner repercussions and echoes of the genocide continue within us and within our children for generations to come.

The masters of violence are frequently hailed as heroes. Only a fool would dare to live under the banner of the true Cross.

My thoughts on this, however, are not so much on violence. Rather, it is the place of the foolishness of the Cross in my daily life. None of us wants to be the fool. We even desire to be admired as we take up the Cross – though the admiration would likely work its own harm. The foolishness of the Cross exalts even our failures. This is so utterly true that St. Paul had to warn that he didn’t mean to suggest that we “continue in sin so that grace might abound.” But, it remains the case that where sin abounds, grace abounds yet more.

Every time I encounter a meme that suggests that people would have been better persons if only they had been whipped more, or that failure is just a sign of not trying hard enough, I hear the voice of the accuser who hates the fool and torments us all. Children, by virtue of their innocence and lack of expertise, are prone to failure. It is the gentle hand of a “comforter” who guides us past such downfalls without engaging in undo damage. Every parent should know (at some point) that we ourselves fail in that effort.

I am struck that Christ spoke to His disciples of a “Comforter” (the “Holy Spirit”). He was concerned that they not be “orphans.” My parents have been dead now for over 10 years. Technically, I am an orphan. But it is not adults whom we so name – it is children. There was a recognition within Christ that His disciples are themselves but children. Though we strike poses and imagine our competency (like Simon Peter’s “I’ll never deny you!”), we remain children. The injuries and damage we have encountered, both as children and later, remain in need of comfort.

The striking feature of the holy fools in our Church’s history, has been their ability to find comfort in a secret place. Publicly, they endured scorn and derision. But somewhere, often known only to them, they found a sweet comfort from the One whose foolishness they dared to re-enact.

In its excellence, the world did not know Christ. We not only despise fools but seek incessantly to portray our enemies as fools (“those idiots!”). However:

“God resists the proud but gives more grace to the humble.”

I many times suspect that God stands before us as a “mute fool,” giving no answer to our accusations and recriminations apart from the silence of his corpse on the Cross. One of the desert fathers once said,

In our world, perhaps only a fool could speak the truth. But, then, it would mean that only fools could understand him.