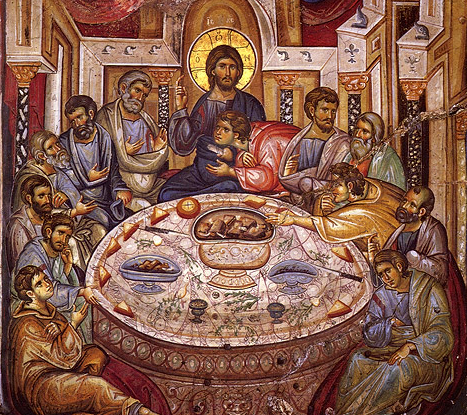 On the day of the feast of unleavened bread, when according to the Law of the Old Testament a lamb was to be slaughtered and eaten, the hour was come that the Savior should depart out of this world unto the Father (cf. Jn. 13:1). Having come to fulfill the law, Jesus Christ sent His disciples, Peter and John, to Jerusalem to prepare the Passover, which, as the shadow of the law, He wanted to exchange it with the New Pascha—His own Body and Blood. When evening had come, the Lord came with His twelve disciples to a large, prepared upper room of a man who lived in Jerusalem (cf. Mk. 14:12–17) and reclined there. Telling them that the Kingdom of God, which is not of this world, and not earthly greatness and glory, but love, humility, and purity of spirit is what distinguishes its members, the Lord rose from the table and washed the feet of His disciples. Having washed the feet and again reclined, the Lord said to His disciples: Do you know what I have done for you? You call Me Teacher and Lord, and you say correctly, for I am exactly that. Thus, if I, your Lord and Teacher, have washed your feet, then you should wash each others’ feet. For I have given you an example, so that you would do the same thing I have done for you.

After the washing of the feet, Jesus Christ celebrated the Passover according to the Law of Moses, and then instituted a new Pascha—the great mystery of the most holy Eucharist. The institution of the sacrament of Holy Communion is the second event that the Orthodox Church remembers on Holy Thursday.

The sacrament of Holy Communion, instituted by the Lord before His sufferings and death, according to His commandment, “this do in remembrance of Me,” from the very earliest times up to the present has been celebrated without interruption on myriad holy altar tables of the Universal Church.

At the supper the Lord definitively foretold to His disciples that one of them would betray Him, and he would be the very one to whom He would give a piece of bread after He had dipped it; having dipped it, He gave it to Judas Iscariot. When Judas took the bread the devil entered him. At that moment the betrayer departed from Christ and His Church. It was already night (cf. Jn. 13:1–30). After stopping the Apostles’ argument over who would be first among them, which should not have been a question of lordship and possession, but of the greater being as the lesser, and the chief being as the servant; and after foretelling the Apostles’ general temptation, and Peter’s thrice denial of Him, and His appearance to them in Galilee after the resurrection, the Lord went with them to the garden of Gethsemane on the Mount of Olives (cf. Lk. 22:24-28; Mt. 26:30:35).

Here His sufferings began: first in soul and then in body. Beginning His sufferings, the Lord said to His disciples, “Sit here while I go and pray yonder.” Then taking with Him Peter, James and John, who had also witnessed the glory of His transfiguration, He began to sorrow and languish. My soul is exceeding sorrowful, even unto death: tarry ye here, and watch with me (Mt. 26:38), said the God-Man to His disciples.

Going a little farther to a rock, He bowed His head and knees and prayed until He sweat blood, as a man who feels the cup of suffering but gives himself over completely to the Father’s will. An angel appeared from heaven to Jesus Christ and strengthened Him. During His prayer, the Lord came thrice to His disciples and said, Watch and pray, that ye enter not into temptation: the spirit indeed is willing, but the flesh is weak. But the disciples were not able to keep vigil in prayer with the Lord, for their eyes were heavy.

Jesus Christ’s prayer in Gethsemane teaches us that amidst temptation and sorrows, prayer gives us great and holy comfort and fortifies our readiness to meet and endure sufferings and death. The Lord also showed by His own example before His sufferings and death the might of prayer that comforts and strengthens. At the same time, He suggests it to the sorrowing Apostles: Watch and pray, so that you will not fall into temptation, for the spirit is willing but the flesh is weak.

At around midnight the betrayer comes to the garden along with a multitude of armed men sent by the high priests and elders. The Lord Himself goes to them and greets them with the words: “It is I”. Thus did He let them know who He is, and they are knocked to the ground by it. Then He humbly allows the betrayer to kiss Him, and the soldiers to take Him to suffering and death (cf. Mt. 26:36–56; Mk. 14:32–46; Lk. 12:38–53). Thus, He shows through His earthly life the continuation of His divine omnipotence and authority over the laws of nature with a word: “It is I who have thrown the betrayer and the people to the ground, having legions of angels in my power, but having come to give Myself as a sacrifice for the sins of the world. I voluntarily and humbly give Myself into the hands of sinners!”

According to tradition, all the faithful receive Holy Communion on this day.