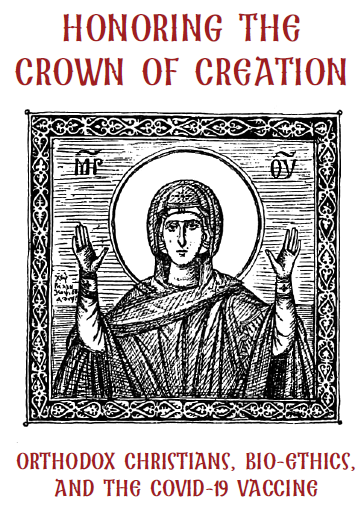 “Recognize the dignity that belongs to you. He did not cause your origin by commandment, but there was a consultation in God in order to know how to introduce into life this being worthy of honor…”   -St Basil the Great

The purpose of this pamphlet is to provide Orthodox Christians with information to morally navigate the new line of vaccines that have been introduced to the public in the United States during the COVID-19 pandemic. Though this pamphlet deals specifically with the various COVID-19 vaccines available, this information can also be applied to the investigation of other vaccines that concern Christian morality, specifically the use of aborted children in scientific research and biomedical commerce. This pamphlet will not discuss the physical risks involved in these vaccines, but this information can be found out through physicians, individual health assessment, and official morbidity and mortality rates made weekly by the CDC. Neither will this pamphlet discuss the difference between inoculation and the novel method of mRNA technology applied through many of the vaccines discussed, a topic that requires individual research. Herein the focus will be on the moral and spiritual issues presented by these vaccines.

St Basil writes, “Each of the arts is God’s gift to us, remedying the deficiencies of nature… And, when we were commanded to return to the earth whence we had been taken and were united with the pain-ridden flesh doomed to destruction because of sin and, for the same reason, also subject to disease, the medical art was given to us to relieve the sick, in some degree at least.”1 Thus, according to the Fathers, who are the true doctors and physicians of the Church, medicine has been given because of God’s grace and love for man.

The Orthodox do not reject medicine and science based on this reasoning. When we are sick and in need of medical attention, we turn to our physicians and get the care that we need. However, St Basil also makes sure to remind the faithful that one should never place the entirety of his health in the hands of doctors, for “to place the hope of one’s health in the hands of the doctor is the act of an irrational animal.”2 Therefore, medicine is given for our benefit but should not be all encompassing lest we turn medicine into idols. He forbids “whatever requires an undue amount of thought or trouble or involves a large expenditure of effort and causes our whole life to revolve, as it were, around solicitude for the flesh…”3

As Orthodox Christians we are not merely concerned about the flesh, but more importantly about the soul. St Gregory Palamas, in his homily given during the Black Plague reminds Christians that it is better to care for the soul because spiritual sickness lasts for eternity while the body will always be mortal.4 Therefore, it is imperative that we are aware of certain medical practices that present moral and spiritual risks. Just as a medical physician is morally obligated to present the physical risks of a procedure, the Church’s shepherds are obligated to make the faithful aware of the spiritual risks associated with actions we take in our daily lives.

Subdeacon Herman Englehart, in his talk Orthodox Christianity and Post-Christian Bioethics, aptly perceived, “The secular culture is inviting, inducing, seducing Orthodox Christians to live and think in heterodox, post-traditional post-Christian terms. The invitation is to see and experience the world wrongly in terms set by the secular, post-traditional, neo-pagan culture, not in the terms of Orthodox Christianity.”5 Englehart further discusses the ways in which society and the medical industry have adopted an entirely different set of values than the Christian principles it was founded in. He calls this “cosmic-disorientation,” for culture now acts and tells us to act as if God did not exist.6 The post-traditional culture in which we live no longer perceives that “all history proceeds from Creation, the Fall, the Incarnation, and Redemption, and is on its way to the Second Coming and Restoration.”7 Without this cosmic structure, the modern world lives without a sense of life going ultimately anywhere and views religion as a mere adornment of culture.

As Orthodox Christians we are called to recognize the full cosmic significance of our Faith, how precious life is and where it is going, and that our Faith is not just an accessory in our life but the living revelation through which we perceive the world. Our post-traditional age has proposed challenges to our Orthodox Christian ethos in what the world defines as medical or scientific advancements. These are established morally perverse expectations and immoral views that have been established as normative, including abortion as an integral element of the medical field and post- Christian lifestyle.

Abortion and the Use of Children as “Specimens”

It is very clear in Scripture and the writings of the Holy Fathers that abortion has always been understood as homicide8 and that there is always “spiritual harm in the death of another person” even in the case of involuntary homicide.9 As abortion has become an integral part of biomedical research, Orthodox Christians are presented with an important moral concern.

While moral theologians in the Roman Catholic church have “declared it ‘morally licit’ to benefit from the exploitation of the remains of aborted children in biomedical research and manufacturing, conceding ground to the abortion industry,”10 there is no foundation in Orthodox tradition to make such a claim or concession. All actions of abortion are seriously wrong and provide grave spiritual consequences. In defining Christian values, St John Chrysostom defines one category as “evil and can never be good—for example, perversion, inhumanity, and cruelty.” Abortion falls into all three of these definitions. Our current culture justifies the use of aborted children as specimens in scientific research if in the end the research is for the benefit of others.

However, with such a grievous and immoral act as abortion, as Orthodox Christians we must recognize that the end never justifies the means—the means in this case being homicide. Medicine has been endowed by God, so it must not be abused in order to justify evil for earthly aims. Men are called to participate with God in the scientific advancement of medicine, and so all advancement and its resources should respect the dignity of life and all human beings. However, the medical field has come to regard aborted children as “tiny human specimens for a growing number of research programs” and in order to effectively protect life and promote an Orthodox ethos in our communities and families, we must fight against all factors that both lead up to abortion and follow abortion.11 We are morally obligated as Orthodox Christians to object to the use of human embryos in any form as a means for curing disease or postponing death.12 Homicide cannot serve as the basis of cure and it will never be seen as life giving in the eyes of the Holy Fathers and the Church.

The use of aborted fetal cell lines is an ongoing moral problem and all COVID-19 vaccines available in the United States at this time continue the promotion of abortion in their development and research. The media and various outlets have told the public that the Pfizer and Moderna vaccines are ethical because fetal cell lines are said to be used only in testing. However this judgement can only be justified through the previously described disoriented and humanistic cosmic-view. These two vaccines still use an aborted fetal cell line in testing and if one is to except the “ethical” stance provided by our post-Christian culture, one must also concede to the continued use of cells originating from an aborted child. Orthodox Christians should not be complacent in this matter and should hold zero-tolerance in the use of aborted children in research. In all cases, the COVID-19 vaccines available rely on this unfortunate and horrific crime. Below are the current vaccines available and their information13:

St John Chrysostom clearly defined the ethical values of Christianity. It is clear that these are unchanging and the dominant culture today has adopted fundamentally different values, creating a climate that constantly bombards the Orthodox way of life. One can starkly perceive the contrast between these two worldviews, and the tension between them, when one considers how each places value on human life. God has maintained His Church in fullness as the “faith which hath made firm the whole world.”14 This means that the Orthodox Faith is not just a moral code or even a way of life, but it is the Truth on which all principles of life are founded and it concerns itself with the holistic healing of the human person.

For the Orthodox Christian, homicide can never be seen as the source of man’s healing and it is fundamentally opposed to the principles of Faith which hold the world firm. Biomedicine is furthering its use of abortion for research in the continual harvesting of the body parts of children, such as the newest cell line WALVAX 2 created in 2015 from the lung tissue of an aborted female. The extraction of these new cell lines and the way in which the children are selected, follow the procedures and guidelines of the development of older cell lines. Thus, older used abortions such as HEK293 and Per.C6 used in the COVID-19 vaccine serve as the foundation for further research on recently aborted children. Orthodox Christians must not comply with this grotesque treatment of the unborn and allow it to qualify as scientific “advancement.”

If we are to survive as Orthodox Christians without compromised consciences we must embed an authentic Christian way of life in our communities, families, and our personal life. We must be different, standing on the firm foundation of our faith in a drastically shifting world. “We are in a culture battle for our own souls, those of our children, those of our grandchildren, and the generations to come. We must decide to be culturally deviant. We must help all to make each day be a new start in our own struggle to heaven, a struggle undertaken with love and towards holiness.”15 Although our world is pontificating and coercing us to be participants in these vaccines, we must stand on the bedrock our Faith and let the world know that Orthodox Christians will not be participants in procedures that involve the murder of another human being. What will truly turn the tides of our current situation is the keeping of our Faith, the bold proclamation of it, and our constant supplication to God for His mercy above all things.

4 St Gregory Palamas, On the Plague