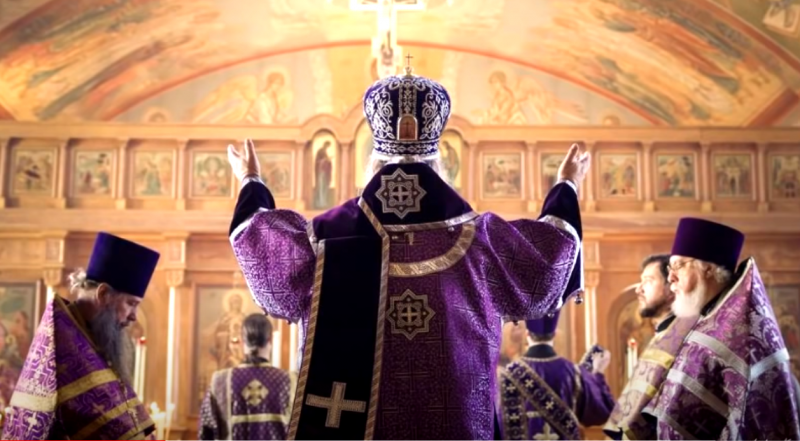 The terrible word anathema, by which the Holy Church punishes those who betray the right belief, means excommunication and exile from the society of believers, cutting off from the spiritual and mystical body of Christ, deprivation of all spiritual rights which the faithful children of the Church are used to.  To be cut off from the Church means to lose everything that the Heavenly Father through the incarnation of His Only-begotten Son and that were granted to us through faith in Him, to lose the grace of baptism and adoption by God the Father, the seal of the gift of the Holy Spirit, by which we were signed in the Sacrament of Chrismation; to lose the most heavenly meal of the Body and Blood of the Son of God, without which there is not nor can there be eternal life for us; to lose the favor of the Father of Heaven, even the very right to pray to Him and to ask Him for anything; to lose hope itself for eternal life, to lose the hope of eternal salvation itself, beforehand to be confident in its everlasting destruction (Full Collection of the Sermons of Demetrius, Archbishop of Chersonese, vol. 4, page 250 ff.).

Such a terrible penalty for apostates from the right belief is based on the words of our Lord Jesus Christ: “If he refuses even to hear the Church, let him be to you like a heathen and a tax collector” (Mt. 18:15-17). The Apostles, following the sayings of the Lord, put away unworthy people from the society of the faithful (see 1 Cor. 5:13; 1 Tim. 1:20), using excommunication, as the last measure of severity for the explanation of the guilty, when all means for their correction were unsuccessful and when the advantage of an excommunication both for the excommunicated and for the Church was expected (1 Cor. 6:5).

The Holy Church, having established to annually do the Rite of Orthodoxy in which the anathema to the heretics is proclaimed, has in view to show them the depth of the evil to which their sophism has thrown them. To be tolerated in the bosom of the Church, they could ease their conscience that their errors do not in themselves exclude the inevitable destruction for their souls, that the image of their ideas can be still combined with spirit of the Gospel, that they, at least, have not so far avoided the general way in order that they honor already those who have completely strayed.

And here the Holy Church, using the shame of those who strayed, takes away from them the attraction of the special wisdom from the errors, by which they are deceived. Struck by the name of God, she takes away their hope for security. Opposing the established confession of the true faith through the sophism of individuals exposes the insignificance of the latter. In such a way the anathema proclaimed by the Holy Church is its last warning voice for those who have strayed.

Together with these the Holy Church by its proclamation of the anathema to the heretics has in view a warning to its faithful children from the fall. Its thousand-year experience witnesses that no wound is spread so quickly, is so opposed to all efforts of healing such as free thought, self-will and depravity. That no kind of afflictions, no kind of persecution have torn away so many souls from the faith in Christ and have ruined it for ages as heresies and schisms. Therefore even its motherly love motivates the Holy Church against such danger, to raise its voice of judgment and foreboding in order to warn all about threatening perdition.

By such action of highest love the Church judgment now made, it is possible to see also from this, that before, rather than to start from the decision of its court, the Holy Church not one-sidedly and fervently prays that the Lord, according to His mercy without end, showed His love even to those who strayed from the true faith. In order that the love without end of God does not allow the devil and His fierce enemies to blind to the end and to destroy forever. In order that the grace of the All Holy Spirit abound where hardness and persistence abound, their reason became enlightened in the knowledge of truth, their heart burned with the warmth of love, their hardened hearts were broken by the fear of the judgment of God, and turned him from his error and he entered into the saving rampart of the Church of God.

Already after this act of mercy the Holy Church with bitter sorrow proclaims not a curse like some people wrongly understand, but a cutting off of the unfortunate from the society of the faithful, who by their false belief and stubbornness, by their words cut themselves off from this sacred society. In such a way the Holy Church now does not show excessive strictness, but the necessary judgment of truth, made together with love and mercy for her enemies who caused her countless grief.

She did not seek their destruction, but their conversion and salvation. Eternal damnation does not betray them, but excommunication offers them forgiveness and mercy if they will understand and repent.