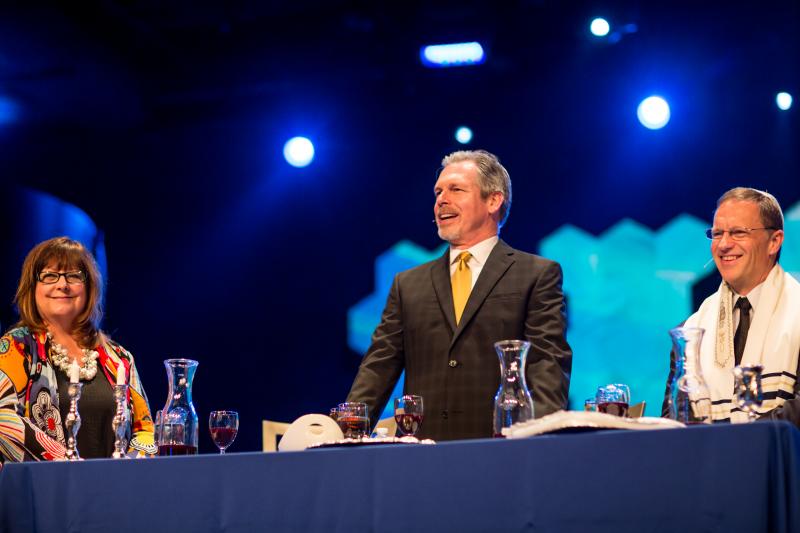 The protestant Evangelical world has, for many years now, appropriated the Jewish Seder service in an attempt to ‘reconnect’ with something more ancient, and I would contend, something more authentic. We offer this excellent piece by Dcn Tim Wilkinson, Reprinted (with permission) from Logos: A Journal of Eastern Christian Studies 56 (2015), published by the Metropolitan Andrey Sheptytsky Institute of Eastern Christian Studies, this article is being published in three installments, with endnotes included on the third installment.

The Jewish Seder has become a routine part of contemporary Easter services in many American churches. Augmented at times with elements drawn from Christianity, it is pervasive enough to occasion little questioning among evangelicals and mainstream Protestants. The Seder is the ritual meal in which Jews remember the exodus of the Israelites from Egypt and their deliverance from bondage to freedom. It involves blessing and consuming symbolic food and wine, asking several ritualistic questions (e.g. Why is this night different from all other nights?) and recounting the enslavement of the Jews, and their subsequent deliverance by God.

In recent years the Seder has been enthusiastically embraced by Evangelicals, who celebrate the ritual for what are clearly religious, as opposed to cultural or political, reasons. The 4000-member Immanuel Church in Silver Spring, Maryland sponsors a yearly Seder that reinterprets the traditional symbolism of Passover using Christian themes. The grape juice stands for Christ’s blood; the matzoh, with its stripes and holes, represents Christ’s pierced and whipped body; and the white cloth symbolizes how Jesus’s body was prepared for burial. The contemporary evangelical practice of the Seder is clearly an attempt to show how the Passover and the subsequent Seder meal prefigure and prepare for Christ as the Paschal offering. However, evangelicals appear to be unaware of, or disinterested in, how these events are related to the Eucharist as the actualization of Christ’s offering of Himself on the cross.

After all, the reason that the Christian Church has not historically practiced the Seder is because this Jewish ritual was a foreshadowing of a new Passover, in which Christ is both the offeror and the offered, whose sacrifice is made present through the celebration of Holy Communion. Evangelical practitioners of the Seder who reject this view, and believe that the Lord’s Supper is simply a memorial service, face a dilemma. Contemporary reconstructions of the order of the Passover meal at the time of Christ are all speculative; the Jewish Seder that is known today did not take its present form until around the year 200 A.D. The question is: Why reject the pattern of the early church – with its focus on the celebration of the Eucharist as the fulfillment of the Passover sacrifice –in favor of the innovations of a later Judaism?

In this paper, let us consider the content of the contemporary Jewish Seder and explore the political and social uses of the ceremony. Then let us consider various theological perspectives on the Seder before attending to evangelical approaches to religious ritual and Church history. Finally, let us consider a critique of the practice of the Seder by evangelicals as informed by Orthodox Christian tradition. 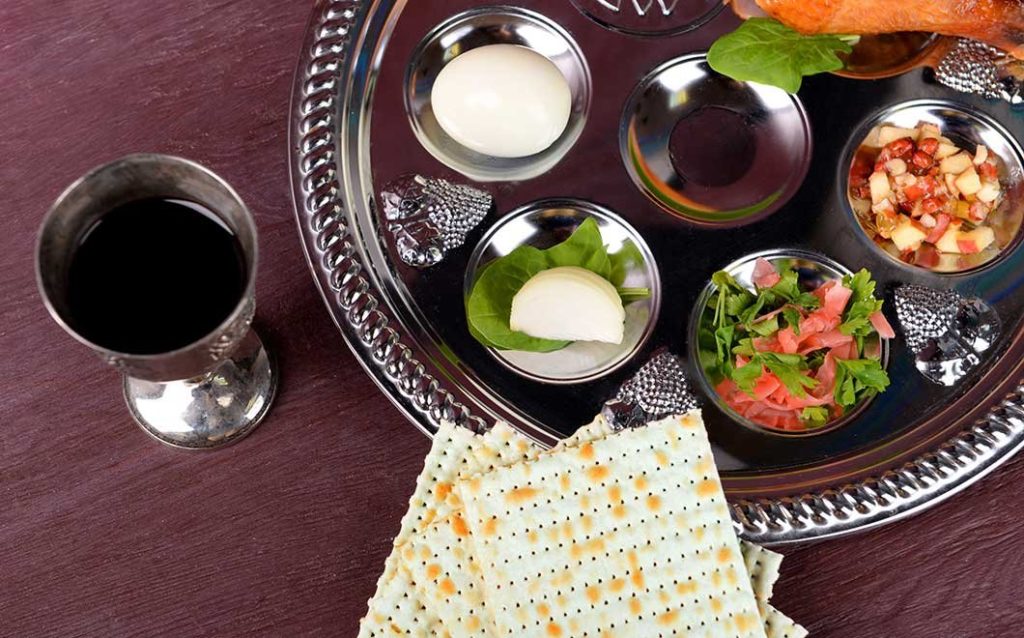 Jews were to keep the feast of Passover by sacrificing a lamb during the day and then consuming it after the setting of the sun. With the establishment of the Temple in Jerusalem, the event described in Exodus 12:21-28 – whereby “the destroyer” passed by the homes of the Jews who had marked their doorposts with the blood of a sacrificed lamb – developed into a pilgrimage festival involving travel to Jerusalem in order to make the Passover sacrifice.

During the New Testament period, numerous paschal lambs were offered in the temple court, with the blood of each lamb collected in silver or gold basins and thrown against the base of the altar as the Levites chanted Psalms 113 and 114. The carcasses were then suspended on hooks, with sacrificial portions removed and burned on the altar, and the rest given to worshippers who would return to their homes to roast and eat the lambs as the final phase of the Passover ritual. Over time additional customs were added, to the point where the event became so highly ritualized that it was known as the Seder, which means “order” in Hebrew.i

Eventually the Seder involved the breaking of unleavened bread, the serving of wine, reclining by the diners, singing of hymns, and the retelling of the Exodus story wherein the importance of the unleavened bread, wine and bitter herbs was explained.ii

With the loss of the Temple in AD 70, the Mishnaic rabbis (the rabbis of the first to third centuries who compiled Jewish oral traditions into the first portion of the Talmud) decoupled the Seder from the necessity of the Temple, transforming it into a kinship celebration taking place in individual homes.iii Without an actual sacrifice of the lambs, greater emphasis was made on the unleavened bread and bitter herbs. The Mishnah, produced in AD 200 as the first major rabbinic redaction of the oral tradition, changed the biblical Passover meal and pilgrimage festival, into a family gathering entailing a different theological understanding. Jewish theologian Baruch Bokser explains this transformation as follows:

A major ramification entailed in the shift is the notion of redemption, for now the festival’s traditional significance contradicted the social reality of living in an unredeemed world. Hence, the celebration became an opportunity to reaffirm that the message of redemption was ongoing. Israel was redeemed from Egypt by God, it continued to benefit from that divine act, and it owed God an expression of appreciation. The dissonance was heightened by the fact that the authors of the Mishnah, choosing not to acknowledge these developments, presented the new order as if it were the continuity of the previous practice.iv

Instead of being a celebration of national redemption and independence from Egypt, the Seder was rapidly altered to conform to reality on the ground. The Jews had been defeated by the Romans, the Temple was destroyed, and the occupiers were firmly in control. The Mishna dealt with this by presenting redemption as personalized liberation rather than in terms of the liberation of Israel. Moreover,

“its account differs from all previous descriptions of the celebration, which assume the centrality of the sacrifice and which make nonsacrifical elements contingent on the offering. Accordingly, the Mishnaic masters, without stating what they are doing, respond to the situation by redefining the role of the Passover sacrifice.”v

The point is that there was a clear break in the meaning and practice of the Seder ritual after the loss of the Temple in AD 70. Various additions were made to the Seder during the following centuries until the invention of the printing press, which permitted the Ashkenazic version to be accepted, endorsed, and widely dispersed.vi In 1934 General Foods published The Maxwell House Haggadah as a promotional for the company, in which a goblet of Maxwell House was likened to

“the fifth cup at the Seder.”

This publication, which outlines the traditional Mishnaic Seder, has been widely distributed for decades and is the most used version of the Haggadah in history. Clearly, the Seder ritual of today is not the same as that celebrated before the destruction of the Temple and is certainly disassociated with the ritual celebrated by Jesus and His disciples in the upper room.

The order of the Seder, as it is now commonly practiced, may be outlined as follows:

Washing of both hands.
Breaking of the bread.
Second cup of wine with blessing by leader.
Sharing the meal: unleavened bread, paschal lamb.

Telling of the Haggadah:

The embrace of a Jewish ritual by Christians, a ritual which for centuries incited anti-Jewish violence around Eastertime, is a complex sociological and theological phenomenon. It may be that its adoption has to do with its flexibility; the Seder has proven to be a malleable tool that can be used for a variety of political, ideological, and religious objectives. For example, Cornell University hosts an annual “Super Seder” event that draws in excess of 1,000 students to 50 different Seders that happen simultaneously.viii These include a sports-themed Seder, an eco-Seder, and a musical Seder.ix President Barrack Obama famously hosted a Seder in the White House in 2011, showing the value of the “new tradition” in shoring up the Jewish vote and demonstrating the ideological flare that such a gathering can entail. A New York Times article about the event states,

“No one yet knows exactly what themes will emerge this year. Maybe ‘taking care of people who can’t take care of themselves and health care reform,’ suggested Ms. Sher, now Mrs. Obama’s chief of staff.”x

In an article entitled, “The Preposterous Politics of Passover: The Use and Misuse of the Haggadah in Our Time,” cultural commentator Michael Medved catalogues what he considers to be numerous contemporary abuses of the Seder. He believes that the Haggadah has become a political battleground in the America’s culture wars. For example, Rabbi Arthur Waskow began promoting a “Freedom Seder” after the assassination of Martin Luther King which celebrated the destruction of the “white man’s stores” during the subsequent Harlem riots. He repeated the stunt in 2004 as a means of objecting to the George W. Bush administration. During the intervening years others used the Seder to promote a variety of causes such as eco-sanity, gay rights, peace between Palestinians and Israelis, and Latin American solidarity movements against tyrannical rulers.

Clearly, the integrity of the Seder has been breached by contemporary culture. Interestingly, there has been little push-back from the Jewish community.xi

Even the most ideological practitioner of the Seder has a vague notion that there is a connection between the Seder meal and the Last Supper that Jesus celebrates as recorded in the Synoptic Gospels. But the exact nature of this connection, like so many of the actions of the Lord, is open to a wide variety of explanations. Moreover, since the time of the Reformation, the meaning of the Last Supper itself has been subject to many different interpretations.

Click here to read Part 2: The Early Church, the Seder and the Eucharist

Dr. Timothy J. Wilkinson is a deacon in the Orthodox Church of America, and is Professor and the Charles L. Boppell Dean of the School of Business & Management at Whitworth University. He earned a Ph.D. from the University of Utah, with a doctoral dissertation that examined subnational export promotion policy. Before coming to Whitworth, Professor Wilkinson taught at Montana State University Billings, The University of Akron, and Boise State University. Wilkinson’s has published seven books or edited volumes and 35 research studies, including Strategic Management in the 21st Century and International Business in the 21st Century. Articles for business people have been published in Business Horizons, MIT Sloan Management Review, and the Wall Street Journal. He is the author of The Customer Trap: How to Avoid the Biggest Mistake in Business.

Reprinted by permission of the publisher; all rights reserved