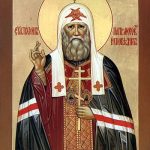 Patriarch St. Tikhon One of the Greatest Universal Saints by Alexander Filipov A talk with Archpriest Vladimir Vorobiev. In 2015, the Russian Church celebrated two important anniversaries of Holy Patriarch Tikhon: February 1—150 years since his birth, and on April 7—ninety years from the day of his repose. Patriarch Tikhon captained the ship of the Church through the bloody storm of anti-ecclesiastical persecution inspired by the godless leaders of the communist regime, who had seized power in much-suffering Russia. Patriarch Tikhon is one of the most venerated saints of our times. He has three feast days: September 26/October 9 is the day of his canonization, March 25/April 7 is the day … END_OF_DOCUMENT_TOKEN_TO_BE_REPLACED