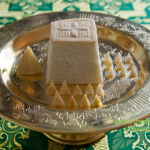 “And there will be one flock and one shepherd” (John 10:16). Since ancient Apostolic times the Liturgy was served with one Bread (and one Chalice) following Christ’s example. This tradition remained in the West. In the East, according to Archimandrite Cyprian (Kern), “The Byzantine Empire weaved a lot of theological and mystical patterns in the liturgical cloth”. In particular, the best bread was chosen as the lamb, while small particles were taken out from all the other breads and placed on the diskos near the lamb in memory of those who had brought those breads (such liturgical tradition exists since 11th century; before that time all the other breads were just raised with … END_OF_DOCUMENT_TOKEN_TO_BE_REPLACED