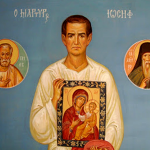 The 20th anniversary of the repose of the keeper of the miraculous Montreal Iveron Icon of the Mother of God Icon Br. José Muñoz-Cortes was celebrated by the Russian Orthodox Church Outside of Russia (ROCOR) on Saturday, reports RIA-Novosti. Hundreds of believers from various cities around the U.S. and Canada gathered at ROCOR’s spiritual center Holy Trinity Monastery and Seminary in Jordanville in upstate New York. A panikhida and akathist were served in the cemetery behind the main monastery church were Br. José, who was murdered in Athens in 1997, is buried. The faithful placed dozens of candles on his grave during the services. All of the services were blessed with the presence of … END_OF_DOCUMENT_TOKEN_TO_BE_REPLACED