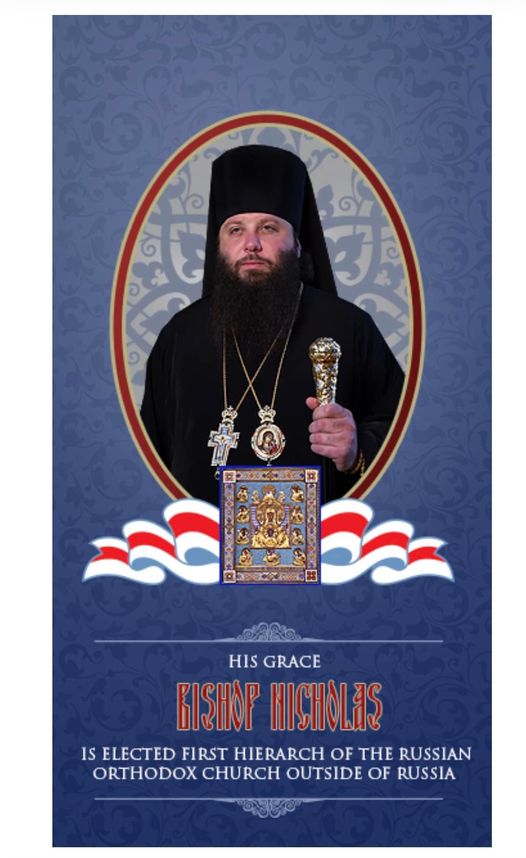 On Tuesday, 13 September, 2022, the election of the new Primate of the Russian Orthodox Church Outside of Russia by its Council of Bishops took place. In accordance with the Act of Canonical Communion, signed on 17 May, 2007, the Council will send the Act of the election, drafted by the counting committee to His Holiness Patriarch Kirill of Moscow and All Russia with a request to bless the electee to assume the duties of the First Hierarch entrusted to him by his brethren archpastors, and for confirmation of the election by the Holy Synod of the Russian Orthodox Church.

The rite of enthronement of His Eminence Metropolitan Nicholas of Eastern America and New York, newly-elected First Hierarch of the Russian Orthodox Church Outside of Russia, will take place on Sunday, 18 September.

The schedule of divine services associated with the enthronement is as follows:

Saturday, 17 Sept.  All-night vigil at the Synodal Cathedral of Our Lady “of the Sign” at 6 pm

At the end of the service, the newly-elected Primate will emerge through the Royal Doors in a black klobuk and common bishop’s mantle and face the congregation. Two senior hierarchs will then present a white klobuk and blue mantle, which the newly-elected First Hierarch will don, aided by subdeacons. At this moment, the senior-most hierarch will announce “Axios” (“he is worthy”) which will be repeated first by the bishops then by the choir. After this, the Primate will bless the clergy and congregants. Before this, the blue mantle and white klobuk will be blessed with holy water by the most senior of the hierarchs of the Russian Church Abroad during the reading of the First Hour.

Sunday, 18 September Divine Liturgy at the Cathedral at 9:30 am.

After the reading of the entrance prayers and the customary vesting of the two senior hierarchs, the new Metropolitan will be escorted to the vesting area, when “Axios” will be repeated by the hierarchs and clergy, then by the choir. Divine Liturgy will commence in the customary manner. After the service, a moleben will be performed along with the entrusting of the archpastoral staff to the new Primate, which was blessed on the crypt of St Tikhon, All-Russian Patriarch and Confessor.