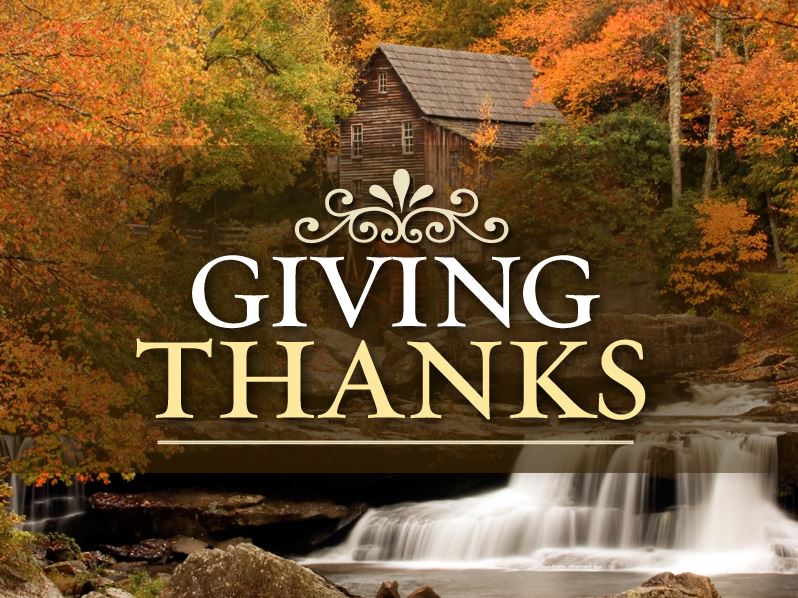 I do not believe it is possible to exhaust this topic. I have set forth a few suggestions of how we might build and maintain a life of thanksgiving. Particular thought is given to those times when giving thanks is difficult.

1. I must believe that God is good.

I struggled with this for many years. I believed that God was sovereign; I believed that He was the Creator of heaven and earth; I believed that He sent His only Son to die for me. But despite a host of doctrines to which I gave some form of consent, not included (and this was a matter of my heart) was the simple, straight-forward consent that God is good. My father-in-law, a very simple Baptist deacon of great faith, believed this straight-forward truth with an absolute assurance that staggered my every argument. I knew him for over 30 years. When I was young (and much more foolish) I would argue with him – not to be out-maneuvered by his swift and crafty theological answers (it was me that was trying to maneuver and be swift and crafty) – but often times our arguments would end with his smile and simple confession,

“Well, I don’t know about that, but I know that God is good.”

Over the years I came to realize that until and unless I believed that God is good, I would never be able to truly give thanks. I could thank God when things went well, but not otherwise.

This simple point was hammered into me weekly, even daily, after I became Orthodox. There is hardly a service of the Orthodox Church that does not end its blessing with:

“For He is a good God and loves mankind.”

A corollary of the goodness of God was coming to terms with the wrathful God of some Western theology (or the misunderstandings of the “wrathful God”). At the heart of things was a fear that behind everything I could say of God was a God whom I could not trust – who could be one way at one time and another way at another.

This is so utterly contrary to the writings of the Fathers and the teachings of the Orthodox faith. God is good and His mercy endures forever, as the Psalmist tells us. God is good and even those things that human beings describe as “wrath” are, at most, the loving chastisement of a God who is saving me from much worse things I would do to myself were He not to love me enough to draw me deeper into His love and away from my sin.

The verse in Romans 8 remains a cornerstone of our understanding of God’s goodness:

“All things work together for good, for those who love God and are called according to His purpose” (8:28).

There are daily mysteries involved in this assertion of faith – moments and events that I have no way to explain or to fit into some overall scheme of goodness. But this is precisely where my conversations with my father-in-law would go. I would be full of exceptions and “what ifs,” and he would reply,

As the years have gone by, I have realized that being wise is not discovering some way to explain things but for my heart to settle into the truth that, “I don’t know about that. But I know that God is good.”

2. I must believe that His will for me is good.

This moves the question away from what could, for some, be a philosophical statement (“God is good”) to the much more specific,

Years ago, when my son was a child, he encountered a difficulty in his life. As a parent I was frustrated (secretly mad at God) and my faith shaken. I had already decided what “good” was to look like in my son’s life and reality was undermining my fantasy. In a time of prayer (which was very one-sided) I found myself brought up suddenly and short with what I can only describe as a divine interruption. I will not describe my experience as an audible voice, but it could not have been clearer. The simple statement from God was:

“This is for his salvation.”

My collapse could not have been more complete. How do you reply to such a statement? How am I supposed to know what my child needs for His salvation (and this in the long-term sense as understood by the Orthodox?). I had prayed for nothing with as much fervor as the salvation of my children. Ultimately, regardless of how they get through life, that they get through in union with Christ is all I ask. Why should I doubt that God was doing what I had asked? In the years since then I have watched God’s word in that moment be fulfilled time and again as He continues to work wonderfully in the life of my son and I see a Christian man stand before me. God’s will for me is good. God is not trying to prevent us from doing good, or making it hard for us to be saved. Life is not a test. No doubt, life is filled with difficulty. We live in a fallen world. But He is at work here and now and everywhere for my good.

My father-in-law had a favorite Bible story (among several): the story of Joseph and his brothers. In the final disclosure in Egypt, when Joseph reveals himself to his brothers – those who had sold him into slavery – Joseph says,

It is an Old Testament confession of Romans 8:28. The world may give us many situations, and the situations on their surface may indeed be evil. But our God is a good God and He means all things for our good. I may confess His goodness at all times.

3. I must believe that the goodness of God is without limit.

I did not know this for many years and only came upon it as I spent a period of a month studying the meaning of “envy.” In much of our world (and definitely in the non Judaeo-Christian world of antiquity) people believe that good is limited. If you are enjoying good, then it is possibly at my expense. Such thought is the breeding ground of envy. The ancient Greeks and Romans believed this to be true to such a degree that they feared excellence lest it provoke the jealousy of the Gods. We do not think in the same metaphysical terms, but frequently on some deep level, we believe that someone else’s good will somehow lessen our own. Within this the worm of jealousy, anger and envy devours us. The good which someone else enjoys is not at my expense.

4. I must believe that God is good and know this on the deepest personal level.

My father-in-law had another favorite Bible story (I said he had several): the story of the three young men in the fiery furnace. This story is, incidentally, a favorite of Orthodox liturgical worship as well. It stands as a Biblical image of our rescue from Hades. In the midst of the fiery furnace, together with the three young men, is the image of a fourth. Christ is with them, and in the hymnography of the Church,

“the fire became as the morning dew.”

my father-in-law it was the confession of the three young men before the evil threats of the wicked King Nebuchanezer. To his threats of death in a terrible holocaust they said,

“Our God is able to deliver us, O King. But even if He does not, nevertheless, we will not bow down and worship your image.”

It was their defiant “nevertheless,” that would bring tears to my father-in-law’s eyes. For much of our experience here includes furnaces into which we are thrust despite our faith in Christ. It is there that the faith in the goodness of God says,

It is confidence in the goodness of God above all things.

I saw my father-in-law survive a terrible automobile accident, and the whole family watched his slow and losing battle with lymphoma in his last three years. But none of us ever saw him do otherwise than give thanks to God and to delight in extolling the Lord’s goodness.

Many years before I had foolishly become heated with him in one of our “theological discussions.” I was pushing for all I was worth against his unshakeable assurance in God’s goodness. I recall how he ended the argument:

“Mark the manner of my death.”

It was his last word in the matter. There was nothing to be said against such a statement. And he made that statement non-verbally with the last years of his life. I did mark the manner of his death and could only confess:

For no matter the difficulties this dear Christian man faced, nevertheless, no moment was anything less than an occasion for thanksgiving.

I have seen the goodness of God in the land of the living.