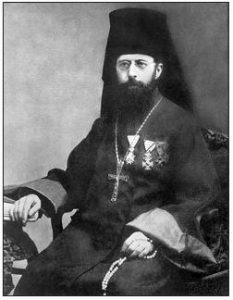 On this commemoration day of St. Sebastian Dabovich, we present a chapter from his work, The Lives of the Saints. His words ring just as true today as they did when he wrote them in the late nineteenth century.

We live in a peculiar age. No time has ever dawned upon the earth like the present era. Startling developments in the world of truth keep the minds of men, to some extent, constantly reaching out after it. More light! greater knowledge! is now the almost universal cry. Great discoveries in science have opened many new and hitherto unknown avenues to the greater physical development of the human family; and at the same time it may be said to be true, that the mental development of man has, to some extent, kept pace. In all this onward movement in the world of material and mental research, men turn to the representative of God among men, and inquire if in the religious world there are any developments; and we find that there are many and great changes in the religious world. Mark you—many and great changes in the world of religious opinion, but very little development in religious life!

Many a searching, although blind, mind has mistaken religion for some philosophical system. Too irreverent and profane handling of religion often makes of it a science, a pastime study. Now and again we come by the way of such who make religion a speculation; yes, and a speculation without a question as to its nature. Do you not know that religion is one of the qualities of your soul? An essential substance, I might say, to be plain, of your self-recognizing, self-satisfied, living spirit? Those who are convinced of this fact are not indifferent to religion. Indifference has no place in the serious life of one who seeks to be right-minded.

We hear it frequently remarked that it matters not what one believes if he does right. But if one does not believe right, he does not do the right thing—that is, if his belief is sincere and carried out in practice. If one believes that which is wrong, and still acts otherwise from force of circumstance, he is wrong in heart. A man may believe in polygamy, but the law and common custom may forbid its practice. He would be in outward life aright, but in heart would be a virtual polygamist. And if circumstances were favorable, his life would bear its legitimate fruit. And this is just as true of every other moral evil. It is all-important to believe right. Every false religion which has cursed mankind has started in a wrong belief. It might not have affected practical duties for a time, but the fruit finally developed. Thus belief in that first lie of Satan’s (Gen. 3:4) has borne its legitimate fruit in—first, the deification of the beautiful, and unnatural curiosity; second, self-love, delusion, and idol-worship; third, free-thinking, protesting, infidelity, and anarchy.

Beloved, when I gave all diligence to write unto you of the common salvation, it was needful for me to write unto you, and exhort you that ye should earnestly contend for the faith which was once delivered unto the saints (Jude 3).

It is worthy, and more, too, it is a duty, to mention the fact that the large number of Bible-worshipers, who daily read the Holy Scriptures, will not see such passages as this. It is strange, yet it is plain to those who understand the human soul. What do those people think of such texts, and also of these:

I will build my church; and the gates of hell shall not prevail against it (Matt. 16:18).

There is one body, and one Spirit, even as ye are called in one hope of your calling. One Lord, one faith, one baptism. One God and Father of all (Ephesians, 4:4-6).

Therefore, brethren, stand fast, and hold the traditions which ye have been taught, whether by word, or our epistle (2 Thess. 2:15).

To read the Bible does not mean to be a Christian. One may go to church and also study the Holy Scriptures, and yet not be religious. One may be religious, and yet be laboring under false impression, and also untruthful doctrine. If your friend requests you to do something for him, and you, knowing what he said, would still hesitate, had you not been positive of his own opinion of the request. If you are not always positive of a man’s idea, even when you have his words, are you sure of God’s opinion? Are you so elevated that you can read God’s mind?

“Obey and believe in my doctrine,” says Rome.

“Be free and strive to create a belief for yourselves,” say the Sects.

But the Church calls to her own,

“Let us love one another, that we may with one mind confess Father, Son, and Holy Ghost.”

What is the Orthodox Church? This is the thought, which is repeated more than once in the closed closet of the heart; the question silently asked by the inquiring mind; and, beyond doubt, it is a proof of the quickening presence of the “Spirit of Truth, which abideth everywhere,” stirring our souls to action superhuman, and to the contemplation of things which are above our comprehension.

Of late, the One Holy Catholic and Apostolic Church is often heard of, and the existence of an Orthodox Catholic Church has come before the notice of the reading masses in ·western Europe and America. A grand revelation! And a heavenly blessing is reserved for all religious people who are striving in these latter times to be right-minded. In the midst of Romanism and Protestantism, free from the fanaticism of a Pius, or the indifferentism of a so-called liberalism, clear of modern congregationalism —almost daily crumbling into isms—we can see a glow in the midst of this chaos, as if of a new spark created in a combustible mass, which is none other than the light once revealed to Adam, then faithfully preserved in the Church of the old dispensation, and finally entrusted to the One and only Church of God—the Alpha and Omega; this spark we now see illuminated to perfection by the new covenant of God with man, the pledge of which is no less than the ETERNAL WORD, the Only-begotten Son of God Himself—the man Jesus, who is the chief cornerstone of the Orthodox Catholic Church, which rests on the foundation of the Apostles, chosen and put into their places by the Supreme Architect—the Lord Jesus Christ. And behold, this is the Holy Orthodox and Universal (Catholic) Apostolic Church—still the ark of salvation for mankind. Could this stronghold, planned by God the Almighty, be obliterated, because of persecution and temptation, and because of the many that willfully stray away, which of themselves break into numerous sects, as the body deprived of life turns to dust? THE GATES OF HELL SHALL NOT PREVAIL AGAINST IT,

We are all obnoxious to error and mistakes, and it is but natural that we should make due allowance for human weakness and ignorance. If God had left us in our higher concerns to our devices, we should be still groping in the dark like the heathen of old, whom God left to themselves, in order to show how utterly unable the natural man is to find and grasp the supernatural truth. God mercifully revealed to us His truth, and expects us to thankfully accept it, neither doubting nor denying it. Therefore, what in human concerns might be called a liberal concession to our opponents, would in religion be a foul treachery, opposite God’s truth entrusted to His Church. It is not liberal, but indifferent, to regard all sorts of religion as equivalent; not to care to what religion one belongs, just as if one was as good or as bad as the other; or, to put it more forcibly, that the claim of one church to teach Christ’s truths purely and completely, to the exclusion of all other churches, is not true, and is simply humbug. This is the principle of all worldly people, and it is a fashion to consider a conscientious religious church-life a downright nuisance, though one is still afraid to call it so. The crowd calls it liberal not to make any distinction between the teaching of the different churches, just as if truth and untruth could exist one at the side of the other without any disrespect to God, the Author of truth. It is want of faith and conviction, or rather want of taking an interest in religion, that produces this baleful indifference.

It stands to reason that it is sinful to care so little for the revealed truth as to place it on a level with error. You will say, shall we then condemn our erring brethren? By no means. Christ forbids us to judge anybody, for only God knows whether our brother culpably holds the error, or whether he believes it to be the truth. But even if he believes his error to be the truth, error remains error, and never can become truth. Therefore, we must always condemn error, though we may not condemn the person erring, but must pity him that he takes error for truth. If you think it is all the same what a man believes, provided he is convinced that it is the truth, you are mistaken, for the heathen of old, the Jews, the Mohammedans, and the professors of all other religions, believe they possess the truth. Why, then, did God send His only-begotten Son, Jesus Christ, into the world, if mankind could be saved without him? Christ commanded His apostles and their successors to convert the world to Christianity, not to that sort of vague Christianity which we find in the numerous seditions which appropriate this name, but to His one Church, which is the Foundation and pillar of the truth, and against which the gates of hell can never prevail. He who believes in these words of Christ can never be indifferent to which Church he belongs, nor can he be indifferent whether his friends or acquaintances continue in error. Therefore, it is his first duty never to countenance religious indifference.

Those who will study the doctrine of the Church, not in the errors and weakness of human superstitions and failings, but in her own divinely inspired rites and institutions, will appreciate the matchless purity of our beloved Church. Let us not be misunderstood. We do not assume to ourselves any prerogative of goodness; on the contrary, woe unto us who have so little profited by the perfect holiness of our Mother Church. The best among us fall grievously short of the ideal of the Church, which towers high above us, bearing aloft the standard of the cross.

Truly glorious and divine is the plan of our Church, but beware of judging her by the failures and errors of her unworthy children. In her daily Liturgy our Mother—the Church—calling the faithful to prayer, teaches us thus: Let us pray to the Lord for the peace of the whole world, the good estate of the holy churches of God, and the union of them all.

For the unity of the Faith, and the communion of the Holy Spirit making request, let us commend ourselves and one another and all our life to Christ our God.

From: The Lives of the Saints and Several Lectures and Sermons, compiled and translated by Rev. Sebastian Dabovich (San Francisco: The Murdock Press, 1898).