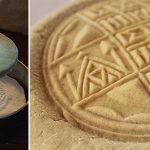 On Saturday, February 24th, Presvytera Deborah will be hosting a Prosphora Bread Baking Class at our home. Space is limited (our kitchen is small!), so let her know as soon as possible if you plan to attend.  About Prosphora A prosphoron (Greek: πρόσφορον, offering) is a small loaf of leavened bread used in Orthodox Christian liturgies. The plural form is prosphora (πρόσφορα). The term originally meant any offering made to a temple, but in Orthodox Christianity it has come to mean specifically the bread offered at the Divine Liturgy (Eucharist). Prosphoro is made from only four ingredients, wheat flour (white), yeast, salt, and water. Salt was not used in early times, and is still not … END_OF_DOCUMENT_TOKEN_TO_BE_REPLACED