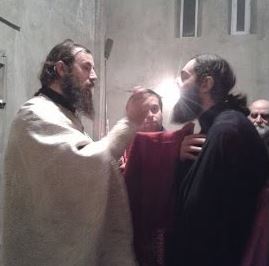 Speaking of the Holy Eucharist, the Fathers and early liturgical texts of the Church have recourse to the metaphor of the flaming coal (anthrax, pruna) in reference to the Lord’s body. For instance, with Isaiah 6:7 obviously in mind, The Liturgy of St. James refers to

from the Eucharistic altar. Indeed, even without using this word, those same doctrinal sources regularly appeal to Isaiah’s experience, when they speak of the Holy Eucharist. Thus, in The Liturgy of S. John Chrysostom, when the Christian has received the Holy Communion, the priest tells him:

“Lo, this has touched your lips and has taken away your iniquity.”

In comparing the sacramental body of Christ to Isaiah’s living coal, these texts testify that the flesh of the risen Christ bears the fire of the Holy Spirit, drawn from the hearth of the heavenly altar.

It is through this purifying and sanctifying coal that we are deified in the Holy Eucharist. Thus, St. John of Damascus wrote,

“Let us draw near to Him with burning desire and…let us take hold of the divine coal [tou theiou anthrakos], so that the fire of our longing, fed by the flame of the coal, may purge away our sins and enlighten our hearts. Let us be enkindled by touching this great divine fire, and so come forth as gods” (The Orthodox Faith 4.13).

In addition to the symbolism of the fiery coal from the altar, the Eucharistic bread itself seems naturally to evoke the image of the oven. This image is amply justified in the Epiclesis, the prayer that asks the Father to send down the Holy Spirit to transform the bread and wine into the Lord’s Body and Blood. Rupert of Deutz perceived this truth, when he wrote,

“The Virgin conceived Him of the Holy Spirit, who is the eternal fire; and through the same Holy Spirit He offered Himself as a living victim to the living God, as the Apostle says [Ephesians 5:2]. Accordingly, on the altar He is immolated by the same fire. For it is by the operation of the Holy Spirit that the bread becomes the body, and the wine the blood, of Christ” (On Exodus 2.10).

The Divine Liturgy, we may say, is the oven of the Holy Spirit. That grain of wheat, which was sown in the earth on Good Friday, sprang forth as the infinite Paschal harvest and now abides forever in the granary of heaven.

Christ our Lord is not content, however, simply to abide in His glorified body. In this body, Christ can be found in only one place. He is needed, however, in many places, and this is the reason He provided a new, sacramental mode of presence. In the Holy Eucharist, He lives on thousands of altars at once, available–edible!–for the myriads of believers who draw near in the fear of God and with faith and love.

In the mystery of the Holy Eucharist, the wheat, which is Christ’s glorified body, is baked in the oven of the Holy Spirit, so that the nutritive energies of God may pass into those who receive Him in faith. Through the cells and sinews of our own flesh there course those divine energies that transform and deify our bodies and souls–our whole being–with the dynamism of immortality–  eternal life.

Commenting on the Bread of Life Discourse in John 6, St. Clement of Alexandria plays on the image of fire stimulating the yeast in the dough, as heat raises the sown seed:

“Here is observed the sacrament of the bread [to mystikon tou artou], for He says it is His flesh and as manifestly raised up; just as fire raises up the sowing from corruption [ek phthoras kai sporas], so like baked bread it has truly been raised up through fire for the enjoyment of the Church” (The Teacher 1.6).

St. Clement likewise speaks of this sacramentally conferred immortality in connection with the Lord’s blood, which we receive from the Chalice. Recalling, with Leviticus 17:11, that

“the life of the flesh is in the blood,” he comments: “To drink of the blood of Jesus means nothing less than to participate in the Lord’s incorruption [tes kyriakes metalabein aphtharsias]. For the Spirit is strength to the Word, just as the blood to the body” (op. cit. 2.2).

This Eucharistic participation in the fire of Spirit is symbolized in the boiling water added to the Chalice right before the reception of Holy Communion. As the deacon pours this water into the blood of Christ, he identifies its symbolism:

“The fervor of faith, the fullness of the Holy Spirit.”