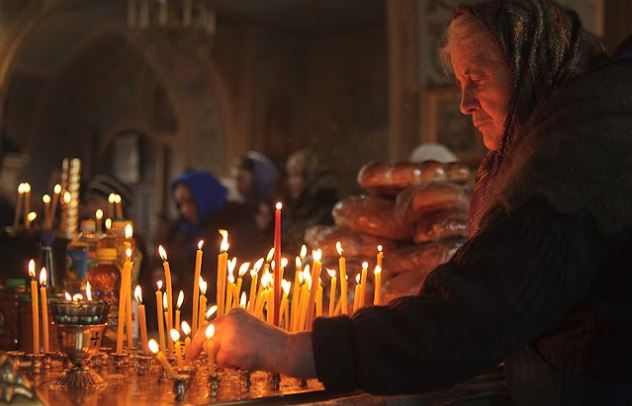 Though liturgical prayers on behalf of the departed are reserved for baptized Orthodox Christians only in the Orthodox Church, private prayer made on behalf of those that reposed without holy Baptism or repentance may be seen in the lives of several saints.

In the life of St. Thecla, the first century martyr and follower of the Apostle Paul, we read of her arrest in Antioch during which time she was kept in the custody of Tryphina, a rich noblewoman who although now a Christian, her daughter Falconilla reposed while they were pagans. One night Tryphina beheld her daughter in a dream, who said:

“My mother, love the stranger, Thecla. Take her as your daughter in my place, for she is the handmaid of God. She can entreat the Lord to place me with the righteous.”

When she awoke she related the matter to Thecla and asked her to pray for her daughter. Straightway, Thecla raised her hands in prayer, and uttered with tears:

“My Lord Jesus Christ, Son of the true and living God, hearken unto Your handmaiden and grant rest to the soul of Falconilla in life eternal, according to Your holy will.”

St. John of Damascus, in his “Homily for Meat-Fare Saturday”, testifies concerning this act of Thecla, saying:

“Did not the Protomartyr save Falconilla after the latter had reposed? Perhaps you may say that her prayer was heard because she was a martyr. To this I reply that it was indeed fitting that her prayer was heard since she was a martyr. But consider also on whose behalf the supplication was made. Was it not for a pagan, an idolater, altogether profane and estranged from the Lord?”

In this same homily, St. John of Damascus goes on to bring up the example of St. Gregory the Dialogist, Pope of Rome, of whom he writes:

“One day, as Gregory the Dialogist, Bishop of Old Rome (a man known to all for his holiness and wisdom, of whom it is said that an angel from heaven served with him when he celebrated the Divine Liturgy), was traveling along a paved stone road, he halted and prayed to God, who loves the souls of men, to forgive the Emperor Trajan his sins. The Saint straightway heard the voice of the most heavenly God, which said to him, ‘I have heard your supplication and shall grant Trajan forgiveness, but I command you to cease your entreaties to Me on behalf of the impure.’ To the veracity of this account East and West alike bear witness.”

Following this, the Damascene mentions Falconilla once more, saying:

“The same is true of Falconilla, of whom we spoke before. She was guilty only of worshipping idols, but Trajan sent numerous martyrs to cruel death. You are wonderful, O Master, and marvelous are Your works, and Your inexpressible compassions do we glorify!”

Other examples from the lives of the saints where private prayer made on behalf of those reposed outside the Church are St. Perpetua who prayed for her unbaptized brother Dinocrates, and St. Theodora the Empress who prayed for her iconoclast husband Theophilos the Emperor.

In each of the above instances, through the fervent entreaty of the saint, Christ granted them a vision where their request for the relief of the reposed was granted. It is not possible to make a formal Church doctrine out of these saint’s expressions of love and affection for those that reposed in such precarious spiritual states, but love transcends every barrier.

The following is a model of a private prayer which might be said for a reposed non-Orthodox person as suggested by the Elder Leonid of Optina, one who was experienced in the spiritual life:

Have mercy, O Lord, if it is possible, on the soul of Your servant (name), departed to eternal life in separation from Your Holy Orthodox Church! Unsearchable are Your judgments. Account not this my prayer as sin, but may Your holy will be done!