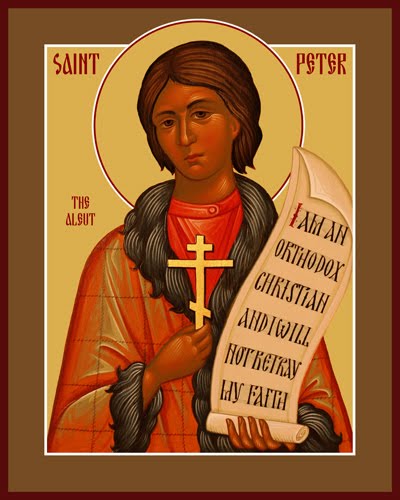 Saint Peter the Aleut is mentioned in the Life of Saint Herman of Alaska (December 13). Simeon Yanovsky (who ended his life as the schemamonk Sergius in the Saint Tikhon of Kaluga Monastery), has left the following account:

“On another occasion I was relating to him how the Spanish in California had imprisoned fourteen Aleuts, and how the Jesuits (actually Franciscans) were forcing all of them to accept the Catholic Faith. But the Aleuts would not agree under any circumstances, saying, ‘We are Christians.’ The Jesuits argued, ‘That’s not true, you are heretics and schismatics. If you do not agree to accept our faith then we will torture all of you to death.’ Then the Aleuts were placed in prisons two to a cell. That evening, the Jesuits came to the prison with lanterns and lighted candles. Again they tried to persuade two Aleuts in the cell to accept the Catholic Faith. ‘We are Christians,’ the Aleuts replied, ‘and we will not change our Faith.’ Then the Jesuits began to torture them, at first the one while his companion was a witness. They cut off one of the joints of his feet, and then the other joint. Then they cut the first joint on the fingers of his hands, and then the other joint. Then they cut off his feet, and his hands. The blood flowed, but the martyr endured all and firmly repeated one thing: “I am a Christian.’ He died in such suffering, due to a loss of blood. The Jesuit also promised to torture his comrade to death the next day.

But that night an order was received from Monterey stating that the imprisoned Aleuts were to be released immediately, and sent there under escort. Therefore, in the morning all were sent to Monterey with the exception of the dead Aleut. This was related to me by a witness, the same Aleut who had escaped torture, and who was the friend of the martyred Aleut. I reported this incident to the authorities in Saint Petersburg. When I finished my story, Father Herman asked, ‘What was the name of the martyred Aleut?’ I answered, ‘Peter. I do not remember his family name.’ The Elder stood reverently before an icon, made the Sign of the Cross and said, “Holy New Martyr Peter, pray to God for us!”

Saint Peter was from Kodiak, his Aleut name was Tchounagnuk, and was arrested and put to death by the Spaniards in California because he refused to convert to Catholicism. The circumstances of his martyrdom recall the torture of St. James the Persian.

Both in his sufferings and in his steadfast confession of the Faith, Saint Peter is the equal of the martyrs of old, and also of the New Martyrs who have shone forth in more recent times. Now he rejoices with them in the heavenly Kingdom, glorifying God, the Father, the Son, and the Holy Spirit, throughout all ages.

Holy New Martyr Peter, pray to God for us!