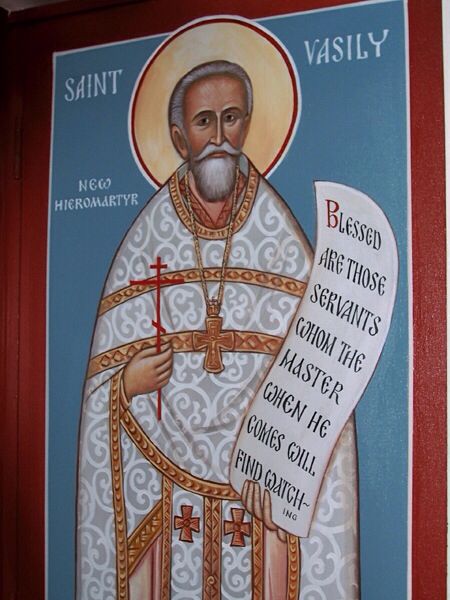 Missionary to Alaska and New York

The holy New Martyr Archpriest Vasily Martysz was born on February 20, 1874 in Tertyn, in the Hrubieszow region of southeastern Poland. His father Alexander was a judge in Molczyce near Pinsk. After his retirement, he was ordained a priest and became rector of a local parish.

In 1884, at the age of ten, Vasily made a brief trip to New York with his father. His beautiful singing during a church service attracted the attention of Bishop Vladimir. The hierarch prophesied that young Vasily would become a priest, and promised that he would invite him to his diocese in America once he was ordained. After returning to his country, he remembered the bishop’s words, and decided to follow in his father’s footsteps and become a priest. He began his theological education at the seminary in Chelm, where the rector was Bishop Tikhon (Belavin), the future Patriarch of Moscow.

Immediately after graduating in July 1899, Vasily married Olga Nowik, and was ordained a deacon. On December 10, 1900 he was ordained a priest. That same month he left Breman for America. The young couple expected to be assigned to a parish in New York, but instead he was appointed to a parish in Alaska. Together with the newly-appointed Bishop Tikhon, he began his missionary service in the land of Saint Herman.

Orthodoxy had arrived in Alaska with the coming of the monastic mission from Valaam in 1794. At the start of the twentieth century, climatic and social conditions in this vast territory remained difficult. In his pastoral work, Father Vasily met Russian settlers and indigenous inhabitants of the region, Eskimos and Aleuts. He also encountered gold rush pioneers quite often..

Father Vasily’s first parish was extensive. He was headquartered on Afognak, but he was also responsible for the people on Spruce and Woody Islands near Kodiak. There were several small wooden chapels scattered on these islands. In 1901, as a result of his efforts, the church of the Nativity of the Most Holy Virgin was built at Afognak (Although the village was completely destroyed in the earthquake and tidal wave of 1964, the church building survives to this day).

Because of the long distances and severe climate, Father Vasily’s priestly work was extremely difficult and required many sacrifices. Often he would leave home for several weeks, in order to celebrate the services, to confess, baptize, marry the living, and to bury the dead, while traveling in a specially constructed kayak.

Even when he was at home, Father Vasily had very little time to devote to his dear family. Besides celebrating the services in church and serving the needs of his parishioners, he taught in the parish school and worked in two church homes for the poor. His family bore the arduous conditions, especially the climate, with difficulty. His wife Olga, who had given birth to two daughters, stayed home. The older daughter, Vera, was born at Afognak in 1902. Their second daughter was born two years later, after they had moved to Kodiak.

During his missionary service in Alaska, Father Vasily kept a diary. It has survived to this day as one of the few records of his personal life. Fragments have been translated from Russian and published in Polish.

Because of the severe Alaskan climate, which especially affected Matushka Olga, and out of concern for the education of their children, the Martysz family transferred to the continental United States in 1906. As a farewell statement from Alaska that year, Father Vasily wrote an article for the Russian Orthodox American Messenger, “The Voice from Alaska,” in which he appealed to Orthodox faithful across the USA to support the building of Orthodox churches in Alaska.

The family settled in Osceola Mills in central Pennsylvania. Their first son, Vasily, was born that same year, and their youngest child Helen was born in 1908, soon after they moved to Old Forge, PA. Father Vasily’s work took him to Waterbury, CT, to West Troy, NY, and finally to Canada. He was assigned to Edmonton and then to Vostok, where he became Dean of the provinces of Alberta and Manitoba. In 1910, he celebrated his tenth anniversary in the priesthood. His prolific and loving pastoral activity endeared him to his flock. Church authorities considered him a very effective, devoted and talented priest, while the faithful loved him sincerely, valuing his modesty and kindness.

Despite their comfortable lifestyle and the relatively large Orthodox community they served in western Canada, the couple longed for their homeland. They feared the loss of their ancestral identity and requested permission to return to Poland. After serving nearly twelve years in America, Father Martysz left the New World and returned to Europe in 1912.

Initially, Father Vasily and his family lived with relatives in Sosnowiec, where he eventually became rector of the parish and instructor in Religious Education at the local girls’ high school. The peaceful life they enjoyed there lasted barely one year, since the outbreak of the First World war disrupted the lives of thousands. Clergy were considered civil servants who were ordered to evacuate their homes, and move to safety inside Russia. At this critical time, Bishop Vladimir, their Archpastor and friend from Alaska, offered the Martysz family refuge in a small apartment within the Saint Andronicus Monastery in Moscow. From here, Father Vasily commuted daily to the distant parish at Valdai, where he taught religious education classes. When the Bolsheviks seized power, he lost this job and was forced to earn a living unloading railroad cars. His own life was endangered because Red Army soldiers often treated clergy with distinct brutality.

In 1919, at the end of the war, Polish refugees were granted permission to return to their former residences. Father Vasily and his family took this opportunity to return to Sosnowiec. They moved back into their former apartment, which had survived the devastation of the war. They did not remain long, however, for that September Father Vasily was assigned to a position in the newly organized Polish Army, in charge of Orthodox Affairs in the Religious Ministry of the War Department. The whole family relocated to Warsaw. Father Vasily started the wearisome but important work of forming an Orthodox military chaplaincy. In 1921, he was promoted to the rank of colonel, and assumed responsibility as the head of the Orthodox military chaplaincy. At this time, the church elevated him to the rank of Archpriest. Father Vasily served as chief of Orthodox chaplains for the next twenty-five years. Within the Ministry of the Interior, he had his own cabinet, and was directly responsible to the Minister himself.

Father Vasily was also a chief advisor and close colleague of Metropolitan George (Jaroszewski) of Warsaw and all Poland. He participated in preparing all the meetings of the Holy Synod, and assisted Metropolitan George in his effort to obtain autocephaly for the Polish Orthodox Church. He accompanied the Metropolitan on the tragic day of February 8, 1923, when he was assassinated. The assassin had also planned to kill Father Vasily as well, but he was captured before he could succeed. Father Vasily remained under police protection for some time, but attended to all the details of the Metropolitan’s funeral, in which the First Regiment of the Szwolezers Regiment participated under orders from Marshal Jozef Pilsudski.

Father Vasily zealously participated in the subsequent process of obtaining autocephaly for the Orthodox Church in Poland, which was granted during the tenure of Metropolitan Dionysius (Walednski) in 1925. Father Vasily became the Metropolitan’s closest advisor and confidant. He often accompanied the Metropolitan and acted as liaison with the Polish Head of State, Marshal Pilsudski. He was often invited to attend cabinet meetings at Belvedere, the Royal Castle, where he regularly signed the guest book on holidays.

In addition to his work as chief military chaplain, Father Vasily devoted much time to organizing pastoral ministry in the Ukrainian internment camps. In February 1921, Father Vasily appointed Father Peter Biton as chaplain for the camp in Aleksandrow Kujawski. He visited the Ukrainian internees himself and helped arrange camp churches. On July 8, 1921, he celebrated the Divine Liturgy in the Ukrainian language for over 5,000 prisoners, while visiting this camp. His sermon, delivered in Ukrainian, greatly improved their morale. He also assisted in organizing chaplains’ training courses in other Ukrainian army camps.

The Polish Secretary of the Army, Lucjan Zeligowski sent a congratulatory letter to Father Vasily on the occasion of the twenty-fifth anniversary of his ordination, December 7, 1925, stating “The virtues of this remarkably talented, conscientious and diligent servant, completely devoted to the Polish nation, expressed in his receiving a high distinction, the Order of Polonia Restituta, which is conferred upon him for his efforts in securing the Autocephaly of the Orthodox Church in Poland.”

Father Vasily retired from his government position in 1936. The couple decided to leave Warsaw and return to their home region, Hrubieszowszczna. They built two houses in Teratyn, one for themselves and another for their widowed mothers. They did not enjoy this peaceful life for very long, because in 1939 the German Army invaded Poland. The village gradually declined. Both of their mothers died. Matushka herself did not live to see the end of the war, but died in 1943. Then Father Vasily’s youngest daughter, Helen, moved into his house with her husband and daughter in order to support him.

Father Martysz spent the difficult war years in Teratyn. On May 4, 1945 (Great and Holy Friday), a few days before the surrender of Nazi Germany, his house was attacked. A female acquaintance warned him of the danger, but he replied, “I have done no harm to anyone and I will not run away from anyone. Christ did not run away.” Father Vasily did not fear and did not flee from his tormentors. He faced them bravely, in a Christ-like way, accepting the crown of martyrdom. The villains, seeking gold and money, had no respect for his uniform as a colonel in the Polish Army, nor for his priestly vestments.

The bandits broke into the house by breaking a window. With callous cruelty they tortured Father Vasily though his only crime was that he was an Orthodox priest. They beat his pregnant daughter Helen, causing her to miscarry. They beat Father Vasily for four hours, reviving him by throwing water on him when he lost consciousness. Horribly tortured, he was finally murdered by a gun shot. The criminals threatened to shoot Helen as well, When she knelt before the icon of Christ and began to pray, the executioner’s aim and resolve weakened. They left, threatening to return and kill her as well.

On Great and Holy Saturday, Father John Lewczuk celebrated the burial rites for Father Vasily in Chelm. He was buried at the local cemetery in Teratyn.

In October 1963, the earthly remains of Father Vasily Martysz were brought to Warsaw and solemnly reinterred in the Orthodox cemetery in the Wola district, next to his wife and mother-in-law. At the beginning of 2003, his holy relics were uncovered and placed in the church of Saint John Climacus in Warsaw. The Holy Synod of the Autocephalous Orthodox Church of Poland promulgated the official Act of Canonization on March 20, 2003, and the rites glorifying Saint Vasily Martysz were celebrated in Chelm on June 7-8.

Orthodox Christians in the Polish Army have taken Saint Vasily Martysz as their heavenly patron. They martyrdom of Saint Vasily was the crowning accomplishment of his pious and dedicated life, a testimony to his amazing courage. He carried his cross to the end without complaint, accepting the crown of martyrdom as he had dedicated his life to Christ and the Holy Orthodox Faith.