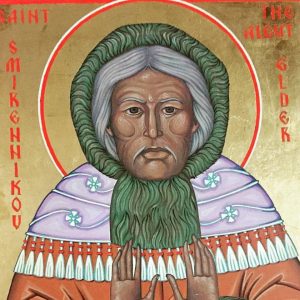 This Aleut Orthodox tribal elder was known as a local ‘shaman’ who cured illness and told fishermen where to find large catches, just as shaman had done throughout the Arctic since time immemorial.

St. Innocent arrived at Akun Island on June 12, 1828 (O.S.), on a trip from Unalaska to Unimak Island, some 400 miles to the east. This was nearly four years after St. Innocent had first arrived in Alaska. St. Innocent was surprised to note that the people of the island were waiting for him at the shore, dressed in their finest clothing. The islanders greeted him by name, even before he introduced himself to them. When he asked them why they were waiting for him and how they knew his name, he was told that their shaman had informed them of his coming. St. Innocent thought this strange, but as he went about his work on the island, he put the incident out of his mind. However, as the days progressed, it came to his attention that one of the elders of the island, who had diligently come to services, and had prepared for and received Holy Communion, was unhappy with him. St. Innocent, wishing to avoid all misunderstandings, called to meet the man, known as Ivan Smirennikov.

The meeting took place, and Smirennikov expressed dissatisfaction that St. Innocent hadn’t asked why the islanders called him a shaman, even though the title bothered Smirennikov. As it turns out, Smirennikov had been baptized by Hieromonk Makary, and after his departure, he told St. Innocent, he had continually been visited almost daily for thirty years by two bright figures, who taught him in the ways of the faith. He, in turn, shared this with the rest of the village. These figures would also sometimes tell him things that were going to happen, which is how the islanders knew that St. Innocent would be arriving and his name. St. Innocent was first curious to meet these two, and he asked Smirennikov if he could meet them as well, and while Smirennikov went to ask if this was permissable, St. Innocent thought the better of it, reasoning that there was no way that demons would spend thirty years instructing someone on matters of the Faith. Furthermore, he considered himself unworthy to come into the presence of these spirits, and that Smirennikov had demonstrated enough to him for him alone that he did not need to meet these spirits to believe.

Before leaving Akun, St. Innocent wrote all these things down, and had them attested to, in writing, by Smirennikov and by his translator, a man by the name of Ivan Pankov. Also, he instructed the Akun islanders to no longer call Smirennikov a shaman. He then sent a copy of his experiences and Smirennikov’s testimony to his bishop, Bishop Michael (Byrudov) of Irkutsk. A reply was eventually received; blessing St. Innocent to go and meet the spirits, should they still be appearing to Ivan Smirennikov on St. Innocent’s next visit to Akun. Unfortunately, by the time St. Innocent visited Akun again, the elder Smirennikov had reposed, and the Angels of Akun appeared to no one else.